A Heartfelt Campaign for a Pandemic-Threatened College Town

In a typical year, Bloomington would be gearing up for a fun-filled football season with travelers, tailgating, and leaf peeping. The pandemic brought these plans to a screeching halt with no in-stadium fans allowed for games. Visit Bloomington knew there was still a way to get alumni and fans to come back, and even better, an opportunity to promote safety and social distanced outdoor activities.

Home is right where you left it.

We helped Visit Bloomington launch a campaign to tug on the heartstrings of Indiana University alumni (and anyone who loves Bloomington), encouraging them to come for an overnight stay. It was an honest plea to promote the fact that Bloomington needed visitors to help fill the void left by sports cancellations. If you truly love Bloomington, then now’s the time to show it—otherwise the destination won’t be the same post-pandemic. 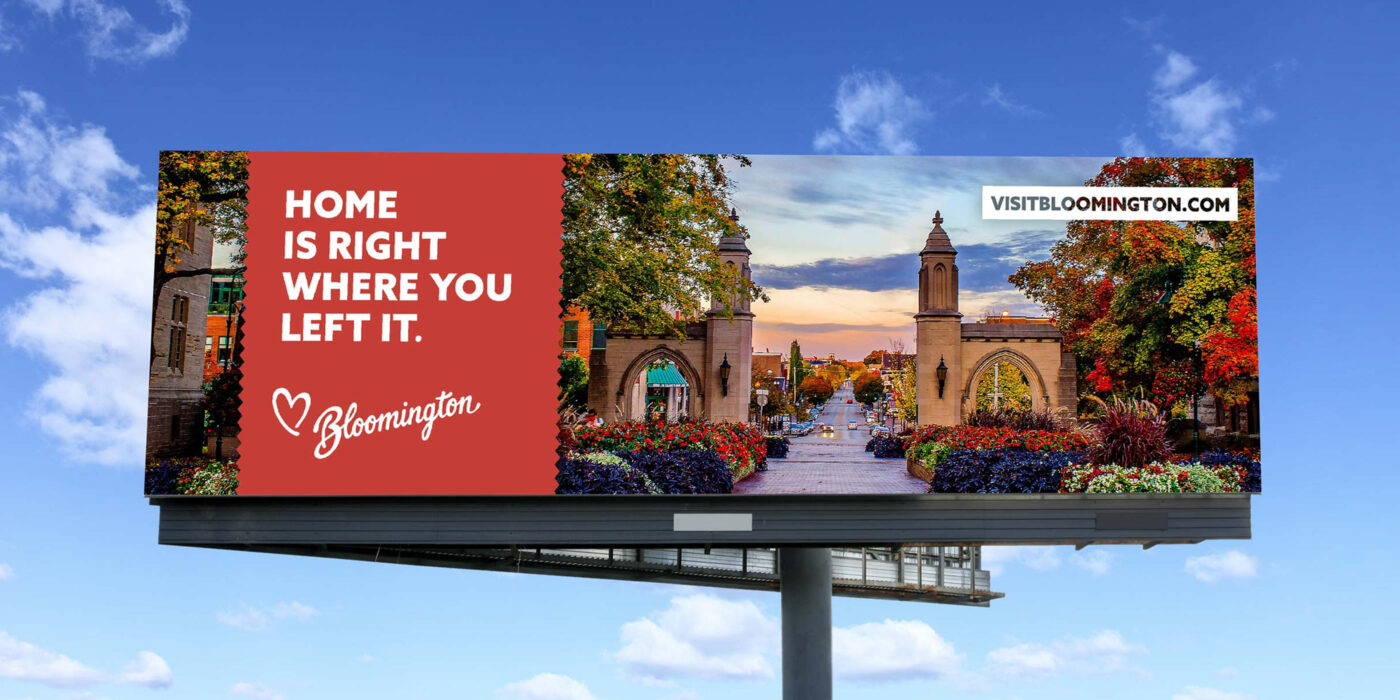 We created campaign assets including billboards, social media + digital display ads, and a blog post in the form of a love letter to Bloomington. All of these creative assets were signed with a “Love, Bloomington” signature graphic. Leaning into nostalgia, the imagery and content was designed to encourage alumni to keep game day alive in Bloomington. We shared all of the best ways to enjoy Bloomington safely, including dining outdoors at favorite spots such as Nick’s, The Irish Lion, and Buffa Louie’s.

Following the campaign launch, hotel capacity jumped to 70%—up by nearly 1,000 rooms from the previous weekend. Capacity continued to steadily grow, with an increase in bookings from mid-September to the end of October. Short term rental options, like AirBnB, increased by over 50% during the fall season.

Visit Bloomington’s website traffic from target drive-to markets was up 50% compared to the same time last year. Social posts garnered significant engagement as well, with 700+ comments, 900+ shares, and a total of 15,560 link clicks for the entire campaign.

As a result of the campaign, Bloomington saw some of its highest visit rates of the year. During those weeks, families with strollers could be seen decked out in IU gear. Couples and girlfriend groups were shopping, dining, and enjoying the fall weather downtown.

The campaign messages were also reflected in our earned media approach. We helped Bloomington land features covering local Airbnbs, fall foliage, and RV road trips. They were even named a top a socially-distant friendly place to travel by USA Today. While many college towns were nervous about cases rising, Bloomington remained optimistic and diligent with safety procedures as Erin White, director of leisure marketing at Visit Bloomington, told the Washington Post.

“They’ve risen to the challenge,” White said of the alums. “They have come with their masks and their social distancing, and they’re bringing a little life to the community. We see them. And we know they’re visiting. The numbers don’t lie.”

Are you adjusting your marketing approach? Let’s discuss.